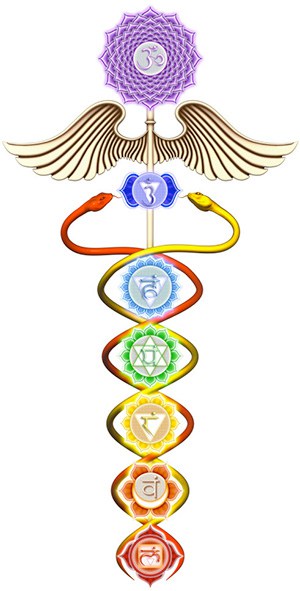 The teachings relating to health tend to focus on foods that will strengthen the body or on removing toxins that block the flow of energy in the body. These teachings are an important part of the picture so long as you haven’t reached a certain level of spiritual realization.

But we need to understand that health is a total process and primarily a reflection of our strength inwardly. Illness and other health troubles come from not being in touch with our deepest reality. Our true nature is healthy. It can’t be otherwise because we are children of God.

Spiritual ignorance, therefore, is the greatest disease of all. From spiritual ignorance all other mistakes follow. When you are ignorant of the fact that you are a child of God and not just the body and personality, when you are ignorant of your wrong attitudes, it is possible again and again to make mistakes that create bad karma and illness. Therefore the most important thing of all is curing this ignorance.

A healing through will power
I once knew a woman who had been hired as a cook at Mount Washington. She was a big, strapping woman and strong enough to carry things it would normally take two or three people to carry. I was very surprised when she told me she’d had polio and was told she would never walk again.

She responded to her illness by telling herself, “I am not going to be a cripple for the rest of my life!” When people weren’t looking, she would tumble out of bed and kind of crawl across the floor and huddle against the wall. Using all of her will power, she would then try to push herself up to a standing position, leaning against the wall for support. She did this repeatedly and with great determination.

She didn’t know anything about drawing energy from the cosmic source, but she just kept trying. She kept sending out the thought that she wanted her legs to move, which was, in fact, sending energy to her body. Little by little, her body started to respond. And after a while, the miracle occurred. She overcame the paralysis completely.

This woman healed herself without knowledge of spiritual laws. How much easier it is to use will power to heal yourself when you know that energy can make you well, and that a strong affirmation of wellness can draw energy from the cosmic source and heal your illness.

An ocean of cosmic energy
The body’s ability to heal or resist disease depends primarily on being able to draw energy into the body from the cosmic source. We live surrounded by an ocean of cosmic energy, and we draw on it to a greater or lesser extent all the time, depending on our will power or willingness, and on the clarity of our awareness. There are a number of saints and yogis who have lived for many years without eating, yet somehow they manage to carry on and, in fact, they put everyone else to shame with their high level of energy. They are sustained by that cosmic source.

The energy we bring into the body from the cosmic source is intelligent. It can transform the chemistry of the body. It can become whatever chemicals we need in order to heal because all of these chemicals are manifestations of cosmic energy. The body itself is not a physical object. It is a holding pattern of energy and this pattern can be changed. When we change the holding pattern, we suddenly find new and different chemicals rushing in to take the place that’s been created for them.

How to offset the karma of illness
How do we become ill? Illness enters the body through the agency of our karma. Our karma creates weaknesses in the aura, and through those weaknesses illness can enter. There isn’t anything we can do about the existence of that karma. We can’t banish it. But we can we can offset karmic law by spiritual means, by devotion and being more in tune with God.

There was a young boy at the Self-Realization Fellowship Hermitage in Encinitas who had an accident which resulted in his cutting off a finger. Paramhansa Yogananda said he had seen a black cloud in the boy’s astral body shortly before this accident. Yogananda said that if the boy hadn’t been at the hermitage, the accident would have been far worse.

Something very similar happened to Daya Mata shortly after I came onto the spiritual path. She was rushed to the hospital with an illness which the doctor diagnosed incorrectly. Karmically she was supposed to die but by Yogananda’s blessings, she lived. Explaining the situation, Yogananda said, “That’s the way karma works. The doctor diagnosed it wrongly because it was her karma to go.”

Attunement with the Divine gives you a very strong aura. It’s as though you were wearing armor. Any bad karma that comes either can’t get through or is greatly lessened.

Illness and spiritual growth
There are certain instances when it is not appropriate to offset the karma of illness. An example involved a very saintly 19-year-old girl in India who had healing powers. She had healed many people but she steadfastly refused to heal her father, who was very ill.

Finally her family, and especially her mother, pressured her so much that she had no choice but to pray for him. However, she wrote her mother a note saying, “You will see what will happen.” She prayed for her father and he became well. Not very long afterwards, he began living a dissolute life.

A dissolute life in the past had created the karma for her father to be ill. His illness was a means of creating a break with his past and changing the mental tendency to lead a dissolute life. For that change to occur, however, the illness needed to reach deep enough levels of his mind to rid him of those old tendencies. When his illness was removed prematurely, all of those old tendencies surfaced.

Illness and physical problems are often an important part of spiritual growth. They are the means by which the soul propels us away from error and toward God.

Love: your greatest protection
Paramhansa Yogananda had a great deal of respect for Christian Scientists but he said that good health requires more than mental affirmation. Our mental attitudes, our dynamism and optimism, are very important. But the most important thing of all is our attunement with the Divine. Swami Sri Yukteswar said that the unfolding of the heart’s natural love fills the body with such harmonious energy that it banishes all disease. To develop the natural love of the heart is the most important thing that we can do for our health.

Saint Francis had so much love that he could eat the scraps in people’s garbage pails, yet he was untouched. His deep attunement to God and Christ protected him. The best thing is to have a balance – to eat properly, to exercise regularly – while always keeping in mind that the greatest need is for loving God, for loving people, and for having this kind of harmonious energy.

Anything that makes us more giving towards other people, more sharing, less defensive and less competitive with them, helps very much in the development of devotion. On the other hand, attitudes of aggression, defensiveness, worry, fear, and self-condemnation constrict the heart and are harmful to the body.

God has no favorites
Divine love not only fills the body with harmonious energy and dissolves impurities, it puts us in tune with the great universal flow. When we are in tune with that flow, we have the power of the universe supporting us, giving us strength. Try to rely more on God. You have to do your part but God has no favorites. Anytime you put yourself in His hands and just flow with His great symphony of life, everything seems to work out for the best.

A lovely instance of this occurred when I visited India some years ago. I had written to friends that I was coming to Calcutta. When I didn’t hear from them I naturally wondered if they had received my letter and would be at the airport to meet me. And yet, I thought, “Well I’ve done my part. God will take care of the rest.”

When I arrived at the Calcutta airport, my friends weren’t there, but I didn’t worry about it. I just stood there thinking, “Well, Master, what do you have in mind?” Hardly ten seconds later a man came up to me and asked my name. He said he had seen a photograph of me a few weeks earlier. It turned out he was in Calcutta to visit a dear friend of mine, someone I had hoped to see while in India but whose address I could not find—and he took me to see this friend. I later got together with the friends who were not at the airport to meet me.

So don’t think you have to do everything. Do your best in a common sense way but, above all, try to be in tune with Him and the universal flow will constantly sustain you. The right things will happen for your physical, mental, and spiritual health. The right guidance will come at the right time. The right kinds of foods will be there when you need them. Everything will be there if you cling to God with faith and devotion.