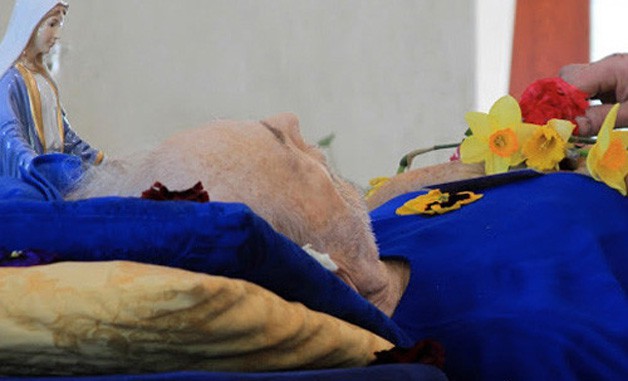 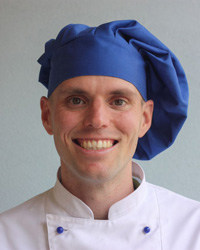 “We are hallowed to have touched the earth he has walked on.”

These were Anand’s words but moments after Swamiji’s passing. For a number of weeks it had seemed as if he was drawing nearer to this day. A man whose minutes were nearly always engaged in something; on many occasions I had walked into his living room and found him sitting in his chair with a look on his face as if to say “Why am I still here?” As Swamiji’s personal cook, preparing his meals was a service that I had always felt privileged and honored to do since starting my service for him 9 months earlier. Yet for me, deep down, it was an act of love and devotion. Preparing a very special breakfast was something I had wished to do for him almost since day one, for no other reason except that I knew it would make him happy. Yet whenever I had thought about it, inwardly I had felt I should wait.

The morning before Swamiji left his body I asked him what he thought of having a nice pancake breakfast some time, and he quickly responded “How about right now?” As I was about to serve him his immediate breakfast I asked “How about tomorrow”? He relaxed slightly into his chair, and said with a smile “Ok, let’s do it tomorrow.” Reflecting later I couldn’t help but wonder whether the reason Swamiji wanted them in that moment, is that he intuitively knew that he wasn’t going to be eating them the next day.

With much enthusiasm I woke up extra early the next morning to get ready for the special meal. Wanting to surprise Swamiji, I set the table with a beautiful white tablecloth, white napkins, white placemats, and candles. The only thing missing for that final touch, it seemed, were flowers. I went outside, yet looking around his garden there wasn’t much to choose from, it being mid-April . I was feeling a little discouraged, yet when I looked up, lo and behold there was our gardener, with a truck full of fresh flowers!

Usually he was not there at that hour, but later said that he felt to come early that morning. (Interestingly, though this man was not in the room with us when Swamiji passed, I believe he was just outside the window. He was a kind man but not outwardly a devotee, yet his karma permitted him to be there on this holy occasion).

While cooking I heard Swamiji come out of his room and go to his desk. Usually I would try not to disturb him at this hour yet I thought perhaps today it would be nice to say ‘good morning’. He was just getting up from his desk as I asked him “Swamiji are you ready for your pancake breakfast?” He didn’t say anything, he but looked at me, smiled, and nodded his head. I noticed his eyes seemed very distant, and in the moment I thought perhaps he was probably not feeling very well. Yet later, I realized that his consciousness had already begun merging into the infinite. His last smile will be something that I will never forget and something so precious, I will forever cherish it in my heart.

I went back to the kitchen to prepare final touches of whipped cream and berries, thinking I had another 15 minutes until serving time. Though when Narayani, Swamiji’s personal assistant, came in to tell me that Swamiji really was ready and was already sitting at the kitchen table, it usually meant I had no more than 2 minutes, 3 max! Miriam, Swamiji’s nurse, was in the kitchen at the time and felt it to be an opportune moment to do her morning check up. Whew!

Moments after she approached Swamiji he suddenly started to convulse and had what seemed to be a seizure, though some say that this could have been the point at which his soul first tried to leave the body. I heard Narayani shout my name from the dining room and when I entered, his body was drooped over and Miriam and Narayani were struggling to keep him straight. Narayani said to me “Jaidhara get Shurjo!”. Though normally he would be in the temple for meditation at that time, this morning he just ‘so happened’ to sleep in a little. When I told him there was something wrong with Swamiji, hastily he threw on his clothes and we both ran back upstairs. When we arrived Miriam sent me to get Anand and Kirtani.

With the sound of clattering flip flops running towards the temple, everyone present at the morning meditation knew I was there, and to be departing with Anand and Kirtani meant only one thing: that there was something wrong with Swami. Later I was told that after we left everyone begin to pray for him. When we arrived back at Swamiji’s house the first thing I noticed was that the rugs and chairs in his living room were askew. Apparently, his body was so weak that in order to get him to his bed they had to move his chair with him inside. The moment I set my eyes on Swamiji lying on his bed my first thought was, “I think this might be the end”. His skin was rapidly becoming pale and looking into his eyes it was as if he was fading further and further away.

Shurjo was chanting ‘AUM’ into his right ear and Miriam would periodically say “breathe”. Hearing Shurjo chant AUM somehow made it feel more real and inside I kept saying to myself “I can’t believe this is happening.” Not knowing what to do, I stood at the foot of his bed and began to pray. Interestingly something started to happen to me personally, for suddenly my throat became intensely dry. It was as if all moisture was taken away, and there was nothing left but sandpaper! The thought kept entering into my mind “It’s okay, you can go get a glass of water”. Yet I knew that this was a special moment and I told myself, “I will not move from this spot!”. I can’t help but wonder whether there was some force trying to prevent me from being there.

While praying I felt as if there was a power that was using us as channels to help aid Swamiji in this process; then, but moments after he departed, this energy went from flowing out through us, to flowing in as blessings. Swami’s breaths were becoming increasingly slow, to almost non-existent, and with last hopes Miriam turned to Narayani and said “Ask him to breathe, he listens to you”. Naryayani went in close and said loudly “Swami breathe!” and he suddenly took a large gasp of air. My heart stood still, for just maybe this might have been a turn around! Yet, in this moment, our beloved Swamiji left his body to merge himself at last into the infinite. Together we knelt by his bedside and began to chant AUM for several minutes, then remained in silence for some time.

I cant help but imagine what beauties beheld behind our mortal eyes that day. To quote Yoganandaji in his poem ‘Samadhi’:
Eternity and I, one united ray.
A tiny bubble of laughter, I
Am become the Sea of Mirth Itself.