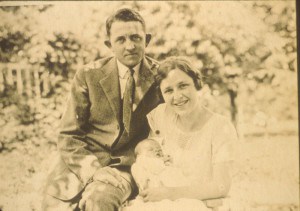 When I met Don [Swamiji] we were both about fifteen years old. Our fathers worked together and the families became friends. I have always been very religious. As a child I thought of myself as “Beloved by God.” Even then, Don had a strong spiritual presence and his mother, Gertrude, was like a saint. I felt immediately drawn to both of them.

Gertrude had a gentleness about her, and radiated warmth and concern for others. I was just a child, but she was so respectful whenever she talked to me, asking questions about my family and friends. The way she listened to my answers, I felt everything about me mattered to her.

She had perfect manners and a certain graceful elegance in everything she did. I remember a formal dinner party with servants bringing each of the courses. No one paid any attention to the servers, except Gertrude. Whenever a plate was put in front of her she would turn and look into the eyes of the person who brought it and thank him for it. It was a small thing but it showed her character.

She was a natural aristocrat in the best sense of the word. Cultured, refined, not at all snobbish. I loved to be anywhere with Gertrude. When she and Don were together, their spiritual connection was like an aura around them. I remember on a ski trip seeing them walking together. It was as if they were in a world of their own.

The house they lived in, though not ostentatious, was Spanish in style and reminded me of a castle. It fit them. The whole family was like royalty. And Don was the young prince, proper and reserved. Not aloof, just quiet and serious. He had a bit of an English accent, which added to the impression that he wasn’t like the rest of us young people.

His brother Bob, who was closest to him in age, was completely different. He was a bit of a rapscallion, a high school hero, out-going, handsome. He exuded glamour like a movie star.

To Bob, I talked about dances and who was going out with whom. With Don, it was always serious subjects, never anything superficial. I remember a school picnic where we spent hours together, discussing every deep subject we could think of.

I never got to know his father Ray the way I did his mother. But he was always gracious, kind, and appreciative. My father thought the world of him and even gave my older sister the middle name “Ray.”

Gertrude and Ray had a real love affair. You could feel it between them and in the atmosphere of their home.

When Don became a monk at SRF, Gertrude was sympathetic with this unusual choice. She didn’t understand the details, but she felt his sincerity and the depth of his commitment, and respected his ardor.

Ray was not spiritually inclined. For him, Don’s choice was incomprehensible. He seemed almost to rebel against it. I remember him shaking his head in bewilderment.

One day, I happened to be visiting the family when Don was home as well, soon after his rather startling life change. I asked him, “What are you seeking?” I wanted to know how it felt to leave everything behind and take up an entirely new way of life.

“I am seeking Truth,” Don said. Later he explained to me, “Truth is not a set of facts. Truth is whatever helps me find joy, understanding, and inspiration in life.”

For years I have contemplated his answer.