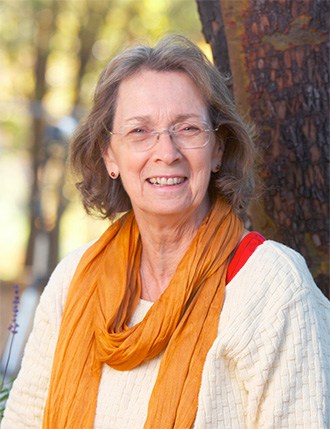 My husband was forty years old when he was diagnosed with ALS, more commonly known as Lou Gehrig’s disease. He was a carpenter — a big, robust man. We have four children; the youngest was three. I knew the medical facts but I still found it impossible to imagine that my husband would never get better, that this disease would weaken him, paralyze him, and then take his life.

A couple of years later, reality had set in with a vengeance and I was beginning to see what I was up against. Every week I drove my husband to the doctor. He had long since lost the ability to drive himself. Afterwards we would stop at a local bakery and have coffee and a treat. If he felt well enough, we’d sit inside. If not, I’d bring things out in a bag and we’d eat in the car.

On this day, he wasn’t feeling well and I went in alone to place the order. As it happened, Swamiji was standing in line in front of me. I was about at the end of my rope. Every part of me was screaming, “This is too much. I can’t do this! Nobody could do this. I want to be a wife, not a nurse. I want a husband to help me raise these children, not an invalid I have to push around in a wheelchair.” I am not proud of how I was feeling, but, well, there it is.

When I saw Swamiji I thought, “Maybe he could talk to Somebody!” God? Master? I didn’t care Who, I just wanted Somebody to do something. There were so many things I wanted to say to Swamiji, but all that came out was, “I don’t think I can do this.”

Swamiji looked at me with such compassion and said simply, “You’ll get stronger.” In other words, don’t try to swallow the whole thing at once. Just take one teaspoon at a time. It was the perfect advice for me. I know how to put one foot in front of the other.

Several years after the diagnosis, when my husband was really sick, he asked Swamiji, “How should I pray?” The question behind it was, “Should I accept this as God’s will or should I ask to be healed?”

Swamiji answered, “Don’t pray for anything. Just pray. Be in a state of openness and communion with God. Put your life in His hands.”

Swamiji’s answer was a huge relief. Adding to the difficulty of the disease itself was the lingering thought in my husband’s mind that he had to do something about it. Now Swamiji was telling him, “Just be with God.”

I did get stronger, as Swamiji said I would. And the last years of my husband’s life were the sweetest years of our marriage.